The Art of Living Someday Today

I was driving from Western New York down to South Florida the other day when I spontaneously got off Interstate 95 (once saw a tee-shirt that said “I drove I95 and I survived”)onto I16 for Savannah Georgia. My intention was to drive in and walk around. The folks at Old Town Trolley Tours had their own idea when they waved their paddles wildly at my car and my friend Loretta’s advise to take a trolley rang in my head. Great call, Loretta!

Whenever I visit a town new to me I pose the same question: what is the one bite I should get if I never get back? She said shrimp and grits at the Cotton Exchange (trolley stop 11) and a lady on the tour also said Leopold’s for ice cream (trolley stop 8).

Our first stop was City Market. It was a fun combo of food, pub and retail.City Market

It was here I met Zach at Savannah’s Candy Kitchen.

He was my first tasting buddy of the day.

I asked about a candy I had always known as Turtles and he politely corrected my by describing them as Gophers. You cannot know how happy I was the day I discovered I’m not allergic to pecans…I did not taste them in Savannah and chose to bring them with me for the ride. They are a treat to behold.

I walked around that square taking in the local color including Paula Deen‘s Lady and Sons restaurant but chose to take the recommendation of the locals.

What a woman, that Paula Deen! She has a retail space connected to the restaurant that reminds me of the are you enter after you get off an attraction at Disney World.

I hopped back onto the trolley and saw the home of Juliette Low, the founder of the Girl Scouts. I was only slightly disappointed the home was a creamy beige and not a soft green I imagined from my old uniform.
The trolley drivers are very informative, each with their own brand of shtick. I did get busted once for talking but, in my own defense, I was only answering someone’s question.

My next stop was number 6, to see the Cathedral of St. John the Baptist.

It is a very beautiful church and well worth the stop.

After visiting the church I walked across Lafayette Square to Clary’s, famous for its role in a movie called Midnight in The Garden of Good and Evil and for their eclairs as big as my head.

It was delicious (I had about a quarter of it this morning as breakfast-glad I had a cooler with me).

Back on for a few stops and jumped off at stop #8 for their famous soda bar called Leopold’s.
My tour guide said it was voted best ice cream in the south…the country…the world! Wow, I felt like Buddy in Elf and just wanted to go in and congratulate them. Worlds best? Fabulous!!

I ordered the Lemon Custard and found it to be very smooth and almost buttery. There was a hint of lemon peel in it and  I ate a good deal of  my single scoop.

I originally set out to stay for three hours and get three good bites. By this time three hours had passed and I had already eaten or purchased for later enjoyment pecan pralines, peanut brittle, milk chocolate and dark chocolate gophers, a ginormous eclair and world famous ice cream.

But what the heck…the seven hour drive down to South Florida could wait a few more hours! I enjoyed meeting up with the same folks who began the tour with me. They were really nice and they expressed both shock and awe at the fact I was doing this alone, sandwiched into my 22 hour drive. If any of you are reading this, please let me know. Did you go back for the shrimp and grits?

Well, back on the trolley for me, this time getting off at stop number 11, Bay Street. 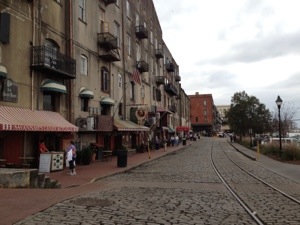 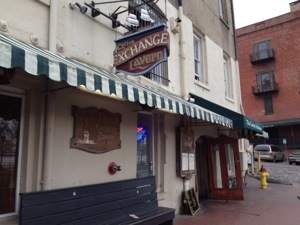 The end of this cobblestone street was the Cotton Exchange.

Here is my new best friend Brandon, as fine a mixologist as you will find, serving me a most beautiful Bloody Mary. And, it was as tasty as it looked. Even the salty seasoning on the glass rim was pretty. The Absolute Peppar gave it a kick without being too spicy.

I love eating at the bar. You learn so much about the local customs, dishes and folklore. Brandon did not disappoint. I explained I do not eat much but wanted to sample the local fare. We agreed that shrimp and grits was a must but he also recommended the Tybee Crab Chowder

I enjoyed the slight kick from this creamy chowder with corn and potatoes. He also brought over a tasting of German Potato Salad, different from the warm version I am used to. It is a red skin potato salad made with celery, mayonnaise and sour cream. Then it struck me…that’s my mother-in-law’s recipe…raised by a German couple…wow!

My journey was almost over. It was only me and the shrimp and grits. The big taste was everything it was built up to be and more. The first surprise were the grits. I was expecting a creamy polenta like mixture. Instead they were more like a creamy biscuit shaped disk. The menu describes the dish as a bowl of organic stone ground grits lightly fried topped with roasted red peppers, onions, jumbo shrimp, andouille sausage (delicious all on their own) and smothered in a sherry cream sauce. I will remember this dish for a long time. It was the perfect balance of cream and heat.

This five and a half hour tasting was a most welcome diversion in a long and boring trip south. Best of all? I have some leftover shrimp and grits in my refrigerator right now!

Have a yummy day!

3 thoughts on “Savannah Georgia On My Mind”